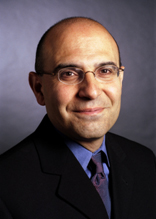 TECHNOLOGY TRANSFORMATION FOR THE 21st CENTURY

Dr. Hossein Eslambolchi is chairman of Divvio Inc., a Web portal that allows users to build personalized “channels” of digital content by leveraging the best and most advanced adaptive learning technologies and Web 2.0 community behavior. He is also chairman of 2020 Venture Partners, which provides technology and operations consulting to private equity firms, service providers, enterprise customers and venture capitalists in the area of telecommunications technology, operation, business and infrastructure.

Dr. Eslambolchi led the transformation of AT&T’s network, systems and services. He left AT&T soon after its merger with SBC in late 2005. Upon his departure, BusinessWeek called him “a critical player in maintaining AT&T’s status as a technology leader” (Dec. 30, 2005) and noted that he is “a bold, but pragmatic, visionary.”

Dr. Eslambolchi served as Chief Technology Officer and advised AT&T’s top leaders on the formulation and implementation of a strategic technology vision from 2001 to 2005. Early on, he predicted that IP would “eat everything” and advocated an MPLS architecture as Ethernet as being the layer 2 backbone that would allow all services to run on IP and work together with connectivity to any device, any place using Location Based Services. His recently published book, “2020 Vision,” sets the foundation for the communications industry over the next two decades. In addition, significant numbers of Dr. Eslambolchi’s service ideas were implemented to increase company revenue as much as $5B over a short period of time such managed services including routers, Security, Hosting, Cloud Computing, virtualization and collaboration including few of his innovations worldwide. He worked tireless with Sales, Marketing and product management to implement his ideas in support of customer needs in both enterprise and consumers market.

Light Reading said that “[Dr. Eslambolchi’s] evangelizing has underscored the notion of where the entire communications infrastructure is heading” when it named him to the # 1 spot on its list of Top 10 Movers and Shakers in Telecom (Nov. 2003). And The New York Times credited Dr. Eslambolchi as “the technological strategist behind AT&T’s ambitious turnaround plan to become a data transmission company selling an array of software products like network security systems” (Jan. 22, 2005).

In addition to serving as CTO of AT&T, Dr. Eslambolchi was also President of AT&T’s Global Networking Technology Services, President and CEO of AT&T Labs and Chief Information Officer, giving him end-to-end responsibility for implementing the company’s technology and operational vision of 21st century. As President and CEO of AT&T Labs, he led a team of some of the world’s best scientists and engineers in developing an architecture that transformed AT&T’s legacy voice and data networks into a converged IP/MPLS network that now reaches all major business centers around the globe.

Dr. Eslambolchi designed a state of art architecture called Service over IP vision in which all legacy services can migrate over new architecture with lowest cost, highest capability and lowest cycle time. He developed several patents for product managers and sales group across enterprise and consumer market to be able enhance revenue stream using state of art MPLS architecture.

As CTO, he also led the company strategy and direction for new innovative services around call center application, e-collaboration, virtualization in both wireline and wireless infrastructures.

Dr. Eslambolchi, in a very short period of time helped transformed ATT from being perceived as ports and pipes into a single global wireless company using state of art technologies and recommended to ATT board of directors on which access technologies to invest for future success of the company.

As President of Global Network Services, Dr. Eslambolchi had responsibility for the design, development, engineering, operations and reliability of AT&T’s global network, as well as for its Global Network Operations Center (GNOC) – AT&T’s networking nerve center. Dr. Eslambolchi was main architecture; engineer and implementer of this new GNOC built over 18 months. He was responsible for several tens of thousands of employees in both engineering and operations of ATT Corporation.

As CIO, he provided the leadership that reengineered AT&T’s underlying information technology (IT) infrastructures with his unique Concept of One and Concept of Zero business processes. While moving AT&T’s legacy networks onto an IP/MPLS platform, he also directed the convergence of the operating support and customer service systems underlying the network, making AT&T the lowest-cost major carrier. This also improved cycle times and allowed customers unprecedented access to the network that permits them to monitor and control their services. More can be found on his superb innovation at www.2020vp.com.

Dr. Eslambolchi has won numerous Awards including notable AT&T Science and Technology Medal and became AT&T Fellow and received the most prestigious technical award in 2002 given to any individual in history of AT&T Communications.

Dr. Eslambolchi holds over 800 worldwide patents – Issued, Pending and in preparation – and was named as one of the most prolific innovator and visionary in communications industry and was named “Inventor of the Year” by the New Jersey Inventors Hall of Fame in 2001 — Famed achieved only by Albert Einstein and Thomas Alva Edison.

Dr. Eslambolchi received his BS, MS and PH.D degree from University of California, San Diego with highest honor. He currently resides in Silicon Valley and gives keynote speeches worldwide. He is scheduled to appear on TM Forum’s Management World Orlando later this month and as one of the main luminaries discussing the current and future of technologies challenges and how they can transfer in 21st century. More on Dr. Eslambolchi illustrious career can be found on www.yahoo.com and www.google.com.